Field Sobriety Tests are not
a fair measure of impairment
for all people.

Although this is intended to be a very cursory summary of field sobriety tests, the attorneys at Oberman & Rice can explain to you in more detail the history of the field sobriety tests, the administrative procedures, the instructions, the standardized clues and the scoring system when you meet with him. In fact, all of our attorneys have received the same training as law enforcement and are certified to administer the National Highway Traffic Safety Administration (NHTSA) Standardized Field Sobriety Tests. Steve Oberman has been certified as an Instructor for the NHTSA DWI Detection and Standardized Field Sobriety Test Administration.

Field sobriety tests have been around as long as the enforcement of DUI laws. For years, field sobriety tests varied among officers within the same law enforcement agency as well as from one agency to another. Field sobriety tests were limited only by the officers’ collective imaginations. In the late 1970’s the United States Department of Transportation, National Highway Traffic Safety Administration (hereinafter referred to as NHTSA), funded research to evaluate currently used physical coordination tests which were used to determine the relationship between intoxication and driving impairment, to develop more sensitive tests which would provide a reliable means of identifying persons with a blood alcohol level above the legal limit, and to standardize the tests. The researchers finally concluded that the three test battery, which included the Horizontal Gaze Nystagmus, Walk-and-Turn, and One-Leg Stand, offered a reliable field sobriety testing procedure. The next step was to standardize these tests. Additional research was therefore conducted to complete the development and validation of this sobriety test battery and to assess the battery’s feasibility in the field, as well as its effectiveness for estimating the blood alcohol content of subjects and facilitating the identification of persons with a blood alcohol content above the legal limit. 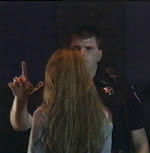 Horizontal Gaze Nystagmus – Nystagmus is the involuntary jerking of the eye. It can be an indication of intoxication. However, the occurrence of nystagmus is not dependent upon the presence of an intoxicant in the body. Substances that would not interfere with driving ability can produce nystagmus, and nystagmus may be congenital or caused by structural neurological disease.

Examples of possible manifestations of alcohol impairment emerging during nystagmus test include the inability to keep the head still; noticeable swaying, and the utterance of incriminating statements. Points are not deducted, however, for any of these behaviors.

Examples of conditions that may interfere with suspect’s performance of the nystagmus test include a suspect having an artificial eye; having damaged or very weak vision in one eye; eye irritants such as wind, dust, and rain; and visual and other distractions which impede the test, such as traffic, blinking lights, rain, etc. Some persons who are not under the influence may exhibit nystagmus.

Nystagmus may also be caused by certain pathological disorders such as brain tumors, brain damage and some diseases of the inner ear. 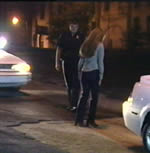 Walk and Turn – In this test, the subject assumes a heel-to-toe stance with the subject’s arms down at her side. The subject is to maintain this position until the officer tells her to begin walking. At that time, pursuant to the instructions given by the officer during the instruction phase, the subject is to take 9 heel-to-toe steps down a real or imaginary line, turn around and take 9 heel-to-toe steps back up the line. The turn is not a pivot, but instead is made by taking a series of small steps with one foot, keeping the front foot on the line. While walking, the subject is to keep her arms at her side, watch her feet at all times, and count her steps out loud. Examples of conditions that may interfere with suspect’s performance of the walk and turn test include wind and weather conditions; the suspect being over the age of sixty; the footwear of the suspect; and highway traffic. 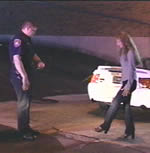 The instructions for this test are given to the subject while the subject stands with her feet together, and arms down at his side until told to start. The instructions which are supposed to be given to the subject (with accompanying demonstration) are for the subject to stand on one leg (either leg), holding out the other foot approximately 6 inches off the ground, foot pointed forward so the raised foot is approximately parallel to the ground. While standing, the subject may be instructed to maintain this position while the officer estimates thirty seconds or the subject may be told to count out loud (one thousand and one, one thousand and two, and so on). Either way, the subject is to keep his arms at his sides at all times and watch the raised foot. Examples of conditions which may impede a suspect’s ability to perform this test include a test surface which is not dry and level; the suspect being over the age of sixty; the suspect being at least fifty pounds overweight; footwear which impedes the performance of the test, such as heels; and certain medical problems and disabilities.

There are other, non-standardized, field sobriety tests which have been approved for use by such organizations as International Association of Chiefs of Police (“I.A.C.P.”) in their “Improved Sobriety Testing for Boating/Alcohol Enforcement” Student Manual and the U.S. National Park Service. These tests include, but are not limited to, the finger to nose test, the finger count test, the hand pat test, the alphabet test, the reverse counting test, and the coin pickup test.